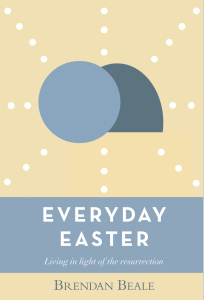 This is an excerpt from an ongoing book project, “Everyday Easter,” coming (Lord willing) some time in 2019.

When I was a kid, I didn’t want to go to heaven.

Seriously. Everything I had ever been taught about heaven (or, at least, how my ten-year-old brain had interpreted and processed it) convinced me that heaven was not a place I wanted to go. I learned all the Bible stories and the standard “go to heaven when you die” gospel. But the idea of the afterlife did not comfort me, it terrified me. On one hand, hell sounded like it hurt a lot and of course I didn’t want to go there. But heaven, to be honest, didn’t sound much better. The way that grownups described it either made it sound like a church service that never ended, or floating around on clouds strumming harps. To a ten-year-old boy, the idea of a never-ending church service is much more akin to hell than to any sort of sublime reward. And since harps are unquestionably the most boring of all musical instruments, the thought of playing one for all eternity filled my young heart with existential dread.

In the years since, I have found that I am not alone in my unenthusiastic embrace of this version of what is supposedly “good news.” Nearly every Christian I have ever interacted with around the subject of heaven, even if they—like me—eagerly anticipate the joy of being with Christ, are quick to say, “But I don’t really know what it’s going to be like.” I’ve had well-meaning and wise believers lecture me on how the details of heavenly life are unknowable and therefore can’t function as motivation in the Christian life. Once at a church picnic, I even overheard two godly young men at the condiment table lamenting how they wouldn’t be able to eat in heaven, and so they resolved to enjoy the barbecue while they still had a chance.

Is that really the “good news” that our faith is all about? A disembodied, ethereal, barbecue-less eternity spent floating on a cloud (or behind pearly gates, or whatever)? No wonder the world isn’t interested in our gospel. To be honest, that’s not a gospel I’m all that interested in either.

This muddled situation is further compounded by the theological mess that we’ve made out of the Easter story. Countless Easter sermons and nearly every funeral homily I’ve ever heard say that because Jesus rose from the dead, I will go to heaven when I die if I put my trust in him. That, after all, is the goal of Christianity, isn’t it? My soul escaping this sinful world to be with Jesus in heaven forever?

No, actually. “Going to heaven because Jesus rose from the dead” makes for a nice funeral message. But while it’s not exactly wrong, it’s not quite right either. It’s not the point of the resurrection, and it’s also not the point of heaven. There’s a bait-and-switch introduced by that proposition, so subtle that you may not have even noticed it. “Going to heaven when I die” is not the same thing as resurrection. That’s not what Jesus’ resurrection was, and it’s not the hope that his resurrection holds out for us either. Jesus’ resurrection was a flesh-and-blood restoration of his physical flesh and blood—and our resurrection will be as well. And “heaven” is not the same thing as “eternal life.” God didn’t “so love the world” that he sent his Son to rescue your soul to float on a cloud forever. An everlasting disembodied existence in heaven is not the end goal of the Christian gospel.

Now, don’t get me wrong: the Bible is clear that when a believer dies, they do go to be with Jesus. To the thief on the cross, Jesus said, “Today you will be with me in paradise” (Luke 23:43). Paul calls this being “away from the body and at home with the Lord” (2 Corinthians 5:8). As Paul says, being with Jesus is “home” in one sense. But that isn’t the end of the story. Heaven is more like the intermission than the finale, a rest stop on the road to restoration. The true end of the story is resurrection, heaven and earth united, and God dwelling with his people in a beautified, remade world forever. Randy Alcorn, in his book Heaven, writes,

Heaven isn’t my home (although I do understand what people mean when they say that). Of course, this present world isn’t my home either, in its current state of decay and death. But the ultimate message of Easter is that one day, this world will be my home again. Because Jesus has risen from the dead, one day I will rise, and this groaning creation will rise, into the glory for which we long.