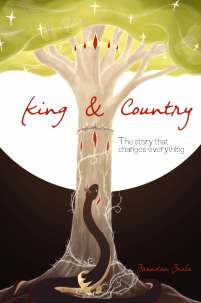 Relationship is at the heart of reality. Jump into a time machine and start traveling backwards, and you’ll never arrive at a time when relationship was not. Even if you twist the time dial so far back that it breaks, and you find yourself drifting in the pre-creation void before the universe existed, you will still find relationship. Go back to the beginning, and then go back farther, and you won’t be able to escape it. Relationship predates reality.

The relationship at the heart of reality is the self-existent, singular and plural, triune God. The Bible presents this one true God as standing forth from all eternity in three distinct Persons, the Father and the Son and the Holy Spirit. Stretching back into time immemorial, the Father and the Son and the Spirit have enjoyed an relationship of love unparalleled in all of history. Before the galaxies were born, before light and dark were ever dreamt of, the Father delighted in the perfect image of his glory in the person of his Son. Listen in to Jesus’ earthly prayers and you’ll overhear whispers of this original Love. “You loved me before the foundation of the world,” he prays in John 17:24. Earlier in that prayer, he speaks of “the glory I had with you before the world existed” (John 17:5). The Son so loves his Father that he rejoices to honor him. “I always do what pleases him,” (John 8:29) Jesus declares confidently. And in between the Father and the Son flows a joy and love so deep, so powerful, so alive, that it stands forth as the third Person of the Trinity, the Holy Spirit. And thus, for all eternity, the Father has rejoiced in his beloved Son, the Son has honored the Father, and the Spirit has united them in a bond of unending delight and adoration. This is the relationship that predates reality.

When learning about how God created the universe, little children will often ask a question along the lines of, “What was God doing before he made the world? Was he lonely? Was he bored?” The answer to that question is an emphatic “No!” God does not lack and he does not need, because he has everything good and beautiful within himself. He doesn’t get lonely or bored or tired or hungry—how could he, in his community of perfection? This is what 1 John 4:8 means when it says that “God is love.” Before there was anything or anyone else to love, the union of delight among the members of the Trinity blazed as a self-sustaining furnace of happiness. God is not static or mechanical, acting out a script or responding in predictable ways. God is an inferno, a hurricane, a blazing supernova of passion and gladness and love. He pulses with infinite beauty and joy, so much so that he cannot be contained. The delight he has within himself is so wonderful, so massive, that is simply had to be shared. And so, as the crescendo of his own magnificence, creation was born.

The creation of the universe was the overflow of God’s delight in himself, the “going public” of his love and beauty, divine community becoming divine communication. The love between the Father and the Son spilled over into a physical universe full of creatures who could reflect and respond to their beauty, and admire and extend their relationship. Everything in the world does this. The “heavens declare the glory of God” (Psalm 19:1) by painting the extravagance of his artistry every day and night. The mountains and oceans are metaphors of his mercy (Isaiah 54:10). The animal kingdom, in all its diversity and abundance, is the surplus of his sufficiency (Psalm 50:10). His immeasurable power and Trinitarian fullness is clearly seen, shining forth in everything he has made (Romans 1:20).

But the capstone of creation, far greater than any galaxy or mountain or animal, was God’s special handiwork: human beings. These creatures, formed from dust and crowned with glory, would be endowed with the spiritual capacity to participate in God’s Trinitarian relationship. In fellowship with the Triune God, they would be able to carry the presence of God with them until the entire world was made a temple for majesty. And as an extension and overflow of God’s glory, they would be tasked with reigning on behalf of God, regents and high priests extending his kingdom across the globe. They would be the means by which the divine life and joy that birthed the universe would be spread throughout that universe. They would represent God by reigning over his world, and would carry God’s presence to the ends of the earth. In doing so, all of creation would be able to fulfill its purpose of celebrating its Creator.