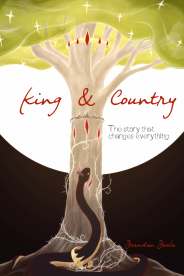 The spectacular story of king and country which the Bible is all about is the story for which we were made. This is the narrative that makes sense of all our hopes and fears and gives meaning and comfort to our longings. But the narrative of king and country isn’t just supposed to give us a general sense of purpose. It is the story that your soul was designed to inhabit. It is a guidebook for every interaction, a light shining into every nook and cranny of our lives, transforming us in the process. This is the story that shapes us, and living in this story changes everything.

The rock band Switchfoot’s sophomore album, “New Way to Be Human” broke new ground musically in both the Christian and secular music scenes. In the album’s title track, lead singer Jon Foreman sang about freedom from the tyranny of a life dictated by other stories. Chasing meaning in any other narrative will ultimately fail, leaving us incomplete and less than human. The lyrics of the song are simple yet profound:

Redemption, Jon Foreman sings, breaks into our futile narrative-constructing and kingdom-building with an alternate way of existence. “There’s a new way to be human,” a new way to live out our calling, a new story to inhabit. But how do we participate in this new way to be human? The final chorus switches up the words, singing directly to the perfect human, the Son of Man:

Jesus is “the only way to be human,” the only road that leads us back to the completeness of our existence. Ever since the fall, Satan’s kingdom has trapped us in sub-human slavery, unable and unwilling to ascend back to the purpose for which we were made. Redemption, then, is nothing less than a restoration of our humanity, a return to full image-bearing dominion. And so, in one sense, Jesus’ “new way to be human” is actually the restoration of the old, original way to be human. Jesus invites us into the restoration of the human project, into the new humanity he is building, a life overflowing with fullness and meaning and purpose.